Australian Communities Foundation co-founders and Patrons Marion Webster OAM and Hayden Raysmith AM meet with members of our giving community. 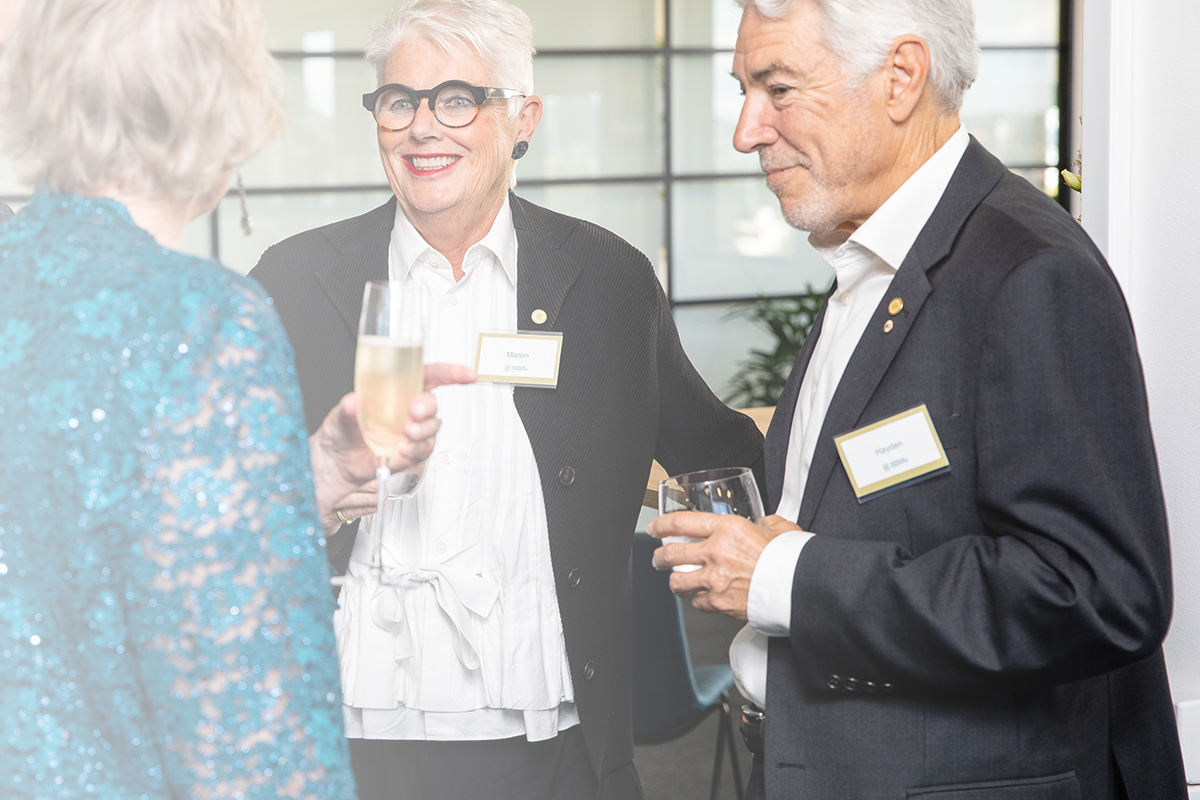 Australian Communities Foundation co-founders and Patrons Marion Webster OAM and Hayden Raysmith AM meet with members of our giving community.

We have come a long way since 1997.
Take a look at our growing support for communities over 25 years…

Number of funds and foundations

Melbourne Community Foundation is established by Marion Webster OAM and Hayden Raysmith AM. 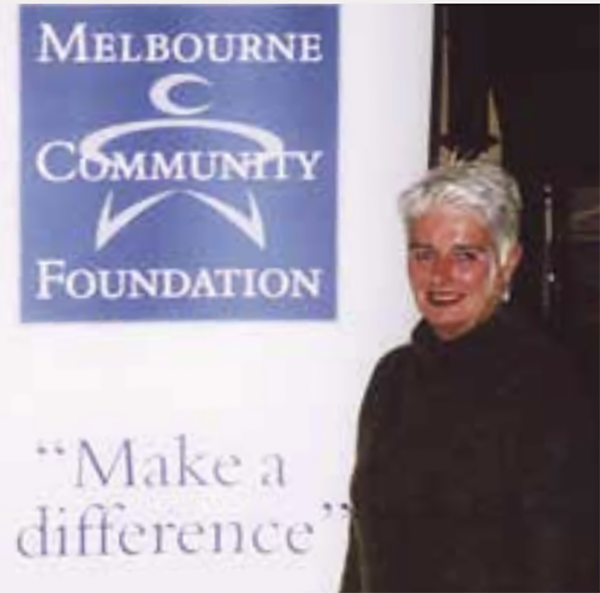 The Foundation moves out of Marion's spare bedroom and into its first professional office space in Flinders Lane, courtesy of the Reichstein Foundation.

The first themed funds are created to bring even more donors into the collective giving model.

Milestone: $1 million in grants given to the community

The Foundation sharpens its focus on strategic initiatives with the help of US community foundation expert, Dorothy Reynolds.

Milestone: 30 new funds and over $1 million in grants distributed in a year 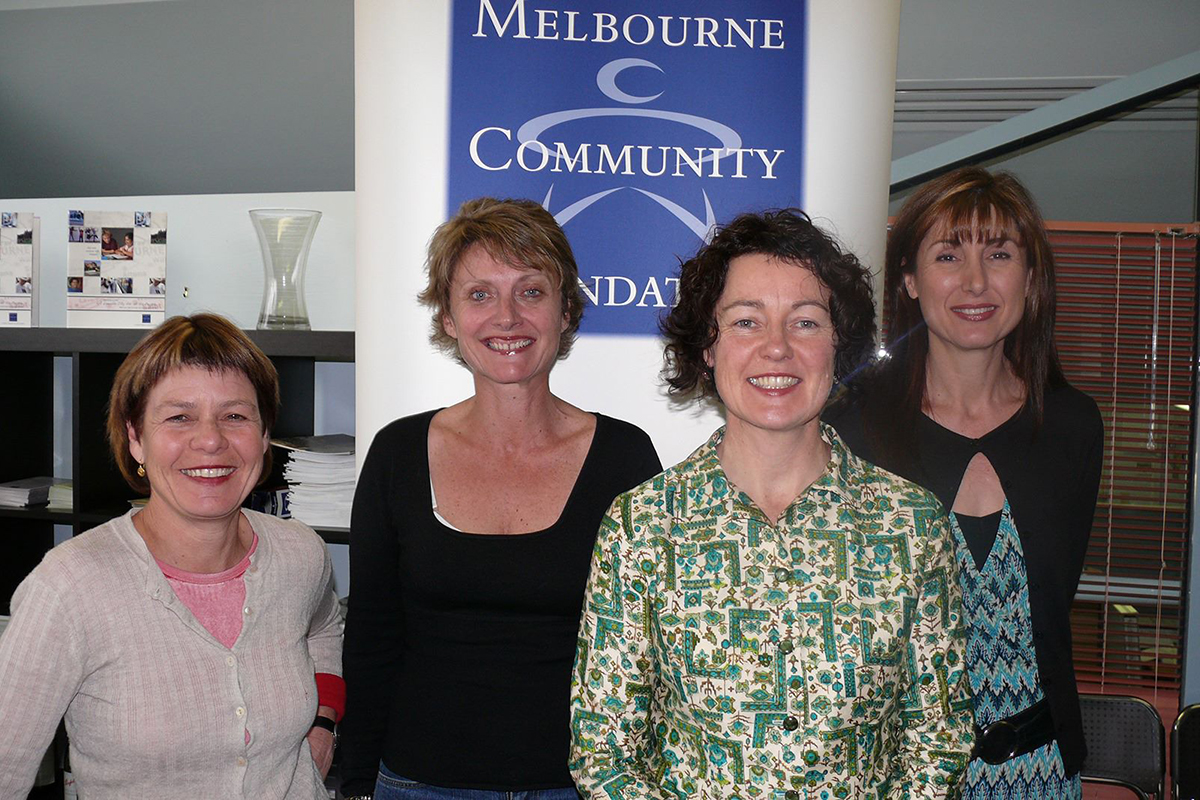 Phase 1 of MacroMelbourne launched to bring sectors together to develop strategic responses to disadvantage, with the model laying the foundations for the later development of the Impact Fund.

The Foundation supports the emergence of the peak body for community foundations.

Peter Hero, Hayden Raysmith AM and Peter Singer AC at our 10th-anniversary celebration in 2007.

Gumnut Accounts are launched to help new givers build their own Named Funds.

The first formal Learning Circle is established to bring together donors interested in supporting Indigenous communities.

Milestone: Over $5 million in grants distributed in a year and our community reaches 200 funds

Milestone: $50 million in funds under management

The Foundation transitions to an Environmental, Social and Governance (ESG) investment approach, seeking the best outcomes for the corpus, people and the planet. 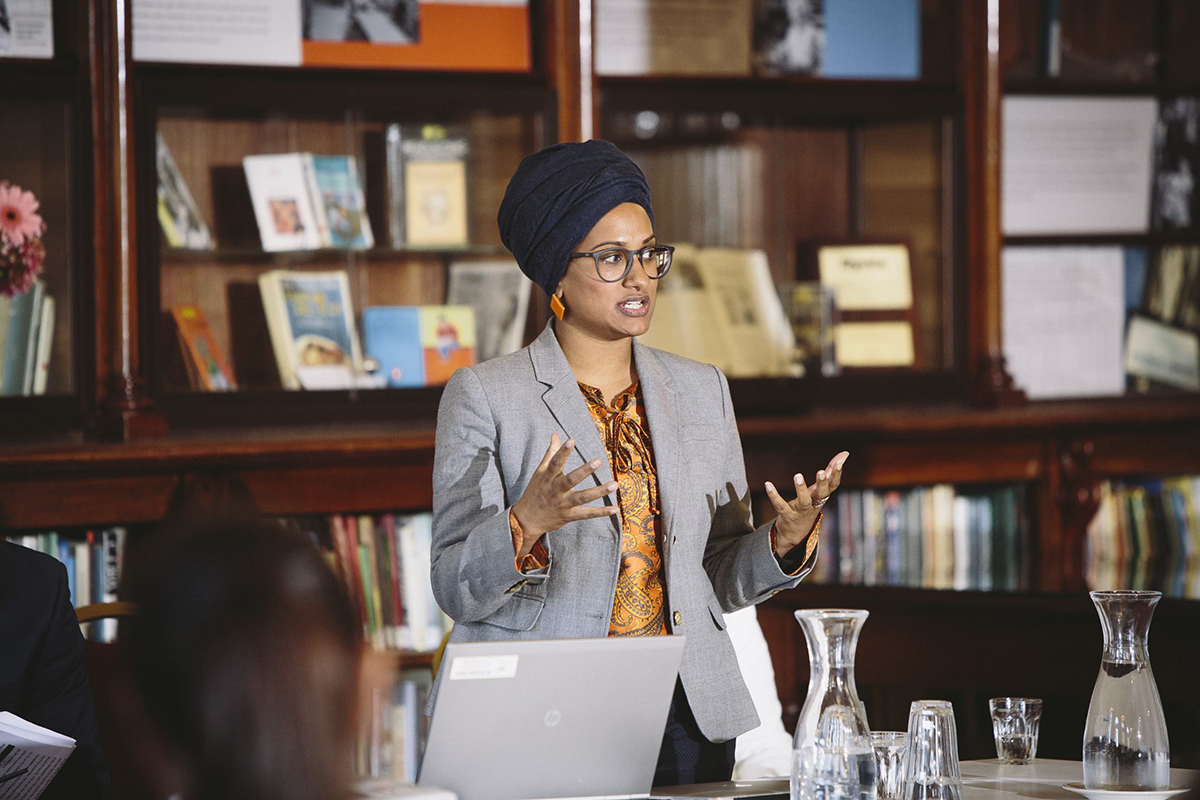 Launch of the Impact Fund

The Foundation hones its focus on impact to target the key areas of social, cultural and environmental justice, and launches flagship fund for collective giving, the Impact Fund.

$600,000 awarded to seven projects in the inaugural Impact Fund Large Grants round.

Woor-Dungin, ACF, the BB and A Miller Fund and the Williams Fund are recognised at the Australian Philanthropy Awards for the Criminal Record Discrimination Project.

The Foundation commits to divesting its $90 million corpus investment portfolio from fossil fuels and focusing on investments with positive environmental outcomes.

The Foundation establishes the Community of Giving as Australia's first formal philanthropic hub with the support of our giving community, the Reichstein Foundation and others.

Members of Towards A Just Society, an ACF fund, hand over the fund to Aboriginal and Torres Strait Islander community leaders to establish Koondee Woonga-gat Toor-rong. 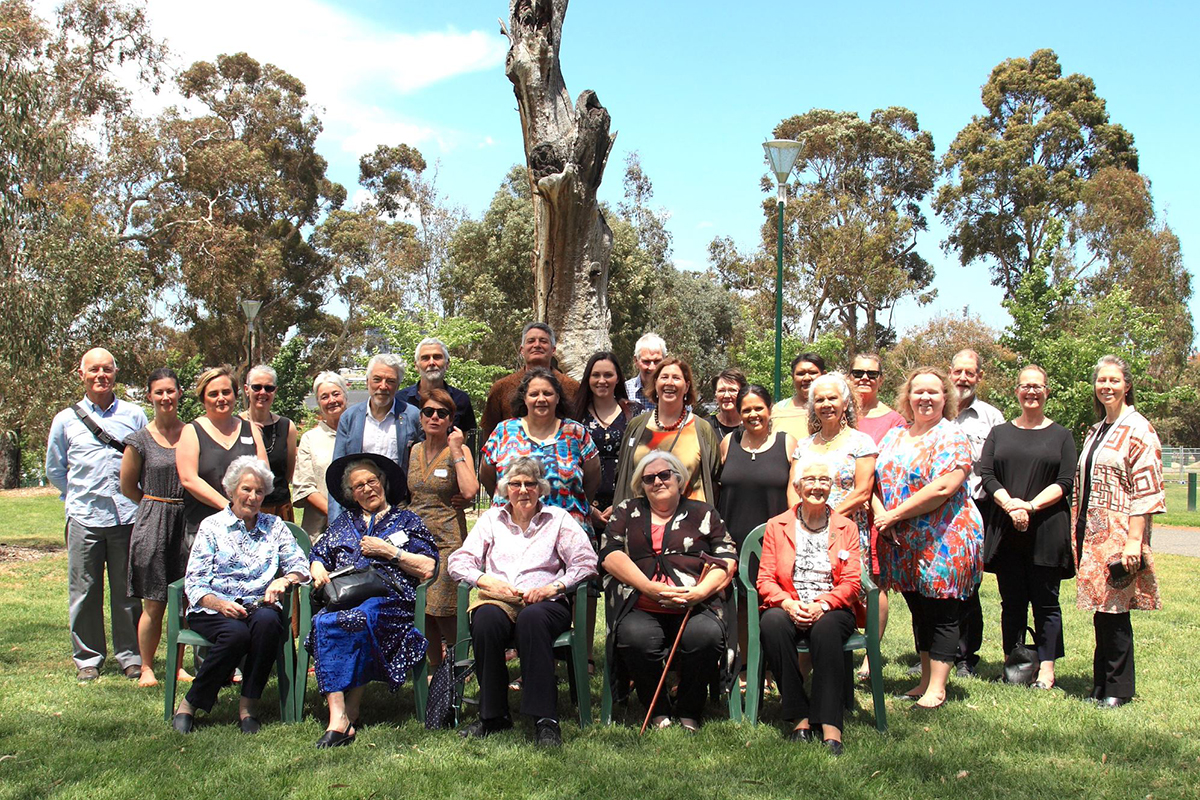 Seven ACF funds recognised at the Australian Philanthropy Awards for their collective support of the Community Organising Fellowship.

The Foundation announces its first impact investments, which are in the environmental and First Nations sectors.

The Foundation meets its target of 100 per cent of its portfolio being responsibly invested.

Milestone: Over $100m in grants given to the community

Five years of the Impact Fund

Our community celebrates five years of the Impact Fund - over $5m granted to changemakers tackling the biggest issues facing Australia. 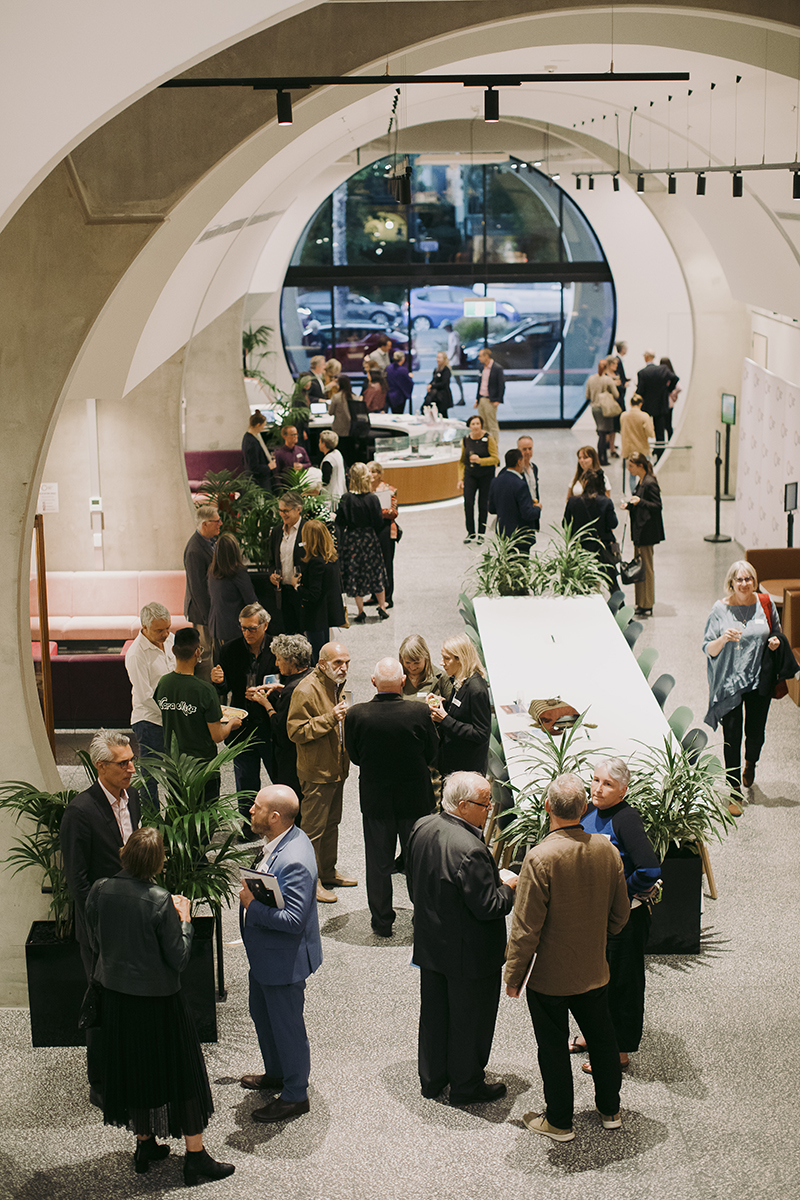 Celebrating five years of the Impact Fund at the Victorian Pride Centre in 2022.

Reflections on 25 years from our co-founders and Patrons

After a modest start in 1997, when the fledgling ACF operated out of Marion’s spare bedroom “with pen and paper and a MYOB program”, the Foundation is now home to 460+ funds and foundations which have collectively distributed more than $100 million across Australia and overseas.

Over the past 25 years, our giving community has been recognised for some incredible achievements on our journey towards a fairer Australia. Here’s a snapshot of some of our biggest highlights.

The Human Rights Law Centre (HRLC) was one of Australian Communities Foundation’s early partners on the national stage with the release of $5,000 to send the first lawyer to Manus Island, HRLC Director Daniel Webb. Support from the Foundation’s Refugee and Asylum Seeker Donor Circle helped establish the Asylum Seeker and Refugee Rights Unit.

“Australian Communities Foundation’s support for my first trip to Manus was hugely formative, both for me personally and for our work at HRLC. The grant helped establish our work in this space and build the impact that we continue to have.”

The Criminal Record Discrimination Project was a collaboration between academics, lawyers, politicians, Aboriginal groups and philanthropy including ACF. Woor-Dungin, an organisation that connects Aboriginal community-led organisations in Victoria and philanthropy, brought them all together and saw the project through.

“When we were talking to Aboriginal communities about the things they needed most to improve their lives, it was clear that ancient and often trivial ‘criminal convictions’ were a challenge to finding employment. This work led to old and irrelevant criminal records being removed from public record, including those given to Aboriginal peoples taken under the Children’s Welfare Act.”

“Every year these leaders go out and train many others, so it’s very strategic capacity building that supports community development and campaigns. The Award was not just for us – there have been many funders supporting the Fellowship since 2014 so that’s a long-term group who are building the capacity of campaigning for environmental justice.”

Established at the outset of Covid-19, the Rapid Advocacy Fund quickly raised over $150,000 for 25 community-led grassroots organisations advocating for change within windows of opportunity that opened during the crisis. The Fund is a partnership between Australian Communities Foundation, Australian Progress and the Australian Council of Social Service.

Reflections on 25 years from our co-founders and patrons 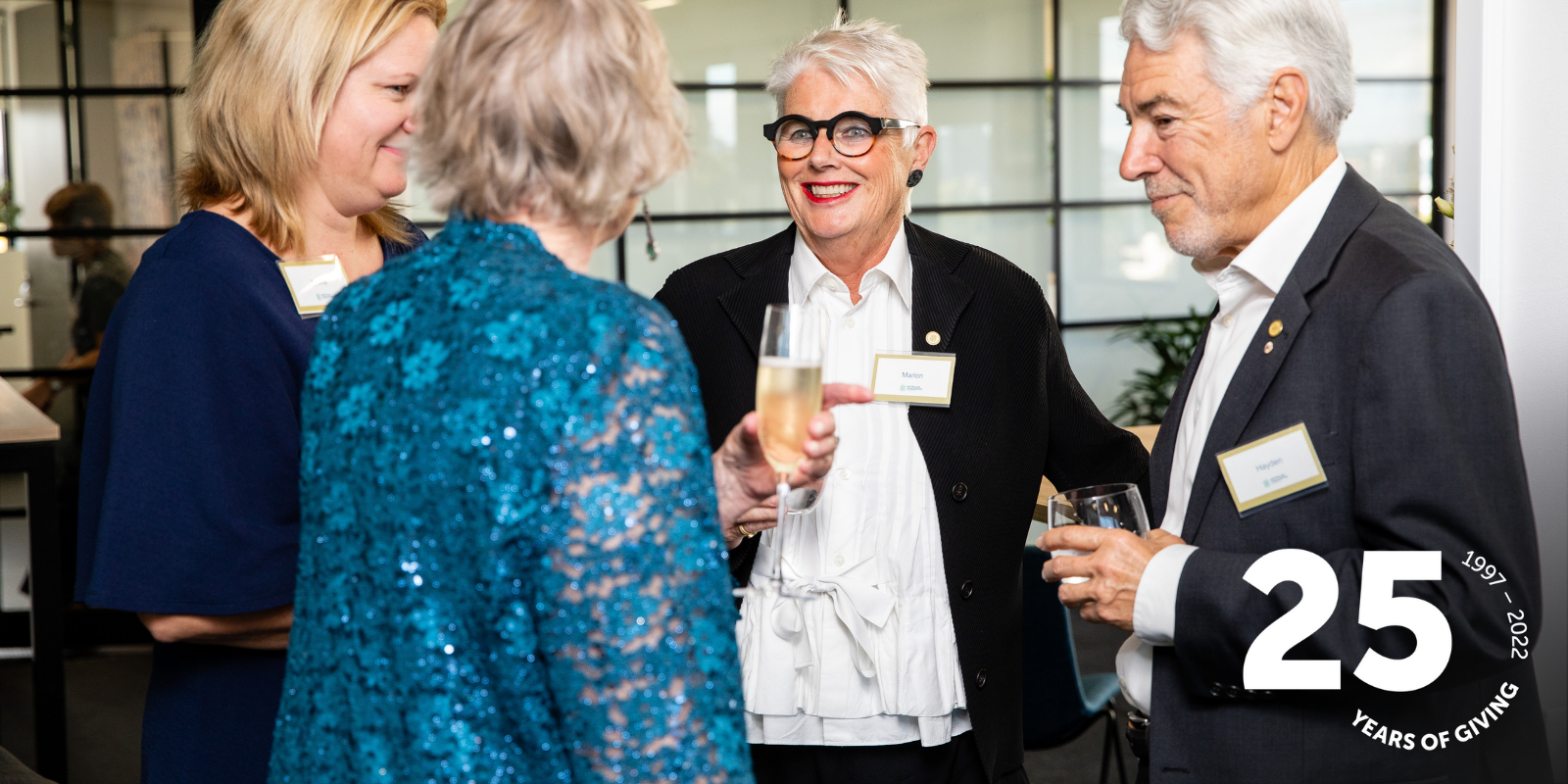 After a modest start in 1997, when the fledgling ACF operated out of Marion’s spare bedroom “with pen and paper and a MYOB program”, the Foundation is now home to 460+ funds and foundations which have collectively distributed more than $100 million across Australia and overseas.

How does it feel to see the organisation you established all those years ago achieve such significant milestones?

MW: I’m just filled with such enormous pride – I can’t believe that the organisation has come this far, it really is amazing. I also have a sense that there’s still enormous generosity in Australia and if we can promote the sort of philanthropy ACF does well, that there is so much room for even more growth and success.

HR: To be honest, one of the first things I felt was a sense of relief! It’s almost like watching your kids grow up, and you’re never quite sure how they’re travelling – you continue to worry about how it might ultimately turn out even though the model’s been quite secure, and the funding’s been terrific for some time.

It was also confirmation that the community foundation model that we brought to Australia all those years ago has stood the test of time and was doing so well. The way in which ACF has evolved over time has been one of its greatest strengths.

Are there any personal highlights from this journey that stand out for you?

MW: Something that stands out for me is that, despite us starting out as a tiny little dot on the horizon, we were embraced by the other progressive foundations and were able to work with them right from the start.

The other moment that really stands out was our 10th anniversary party at Abbottsford Convent. We didn’t know what sort of response we’d get from our donors and supporters but we ended up with 100 people and a waiting list! It was, in a sense, a coming of age – we had a critical mass of support and a strong sense of wellbeing.

“The building of trust has enabled our donors, in many cases, to be our best advocates.”

What do you think is special about ACF and its community of givers? Has there been a ‘secret’ to its success?

MW: Put simply, for me it’s about building trusting relationships and how those relationships have enabled donors to come on the journey with us. The building of trust has enabled our donors, in many cases, to be our best advocates.

Something else that’s special is the Community of Giving office itself. I think that has been a terrific innovation to have that energy, collaboration and creativity all concentrated in one space with people sharing ideas constantly.

What are your thoughts on the current state of philanthropy, and community foundations in particular?

HR: I think it’s still very under-developed in Australia and it doesn’t seem to me that the idea of giving back to the community has taken hold.

I think there’s room for really creative thinking where not just philanthropy but also businesses will be driven by their social purpose.

MW: I agree that philanthropy is under-developed, but I feel that will change as the generations change. There are so many innovative younger people who are doing things under the radar who are going to move philanthropy in a much more creative direction with things like social investment. ACF, the Reichstein Foundation and other progressive funds are providing really good role models for that change.

What message would you like to leave with the ACF donor community?